Do Solar Panels Work on a Cloudy Day?

The short answer to the question ‘do solar panels work on a cloudy day’ is yes, they do. A cloudy day will impact the efficiency of your panels however it will not cause them to stop working. According to the Environmental and Energy Study Institute (EESI), even in partly cloudy weather, solar photovoltaic cells can still operate at 80% of their maximum output. This is due to the fact that solar PV panels need daylight (‘diffuse’ light) not sunlight (‘direct’ light).

But this begs the question; how much energy can my solar system generate during a cloudy day? This is a question that most Irish solar buyers will ask as they research their buying options. The Irish climate is unpredictable at the best of times so this is very much a valid concern. The answer is – much more than you think.

Daily Irradiance for Day in June, in Dublin

How Do Solar Panels Work?

The purpose of a solar panel system is to absorb sunlight, also known as photovoltaic energy (PV), and convert it to direct current (DC) power. The key components to solar panels are called photovoltaic cells. Each individual PV panel contains a number of these cells, which are all sandwiched between two layers of semi-conducting material. These cells absorb photons by gathering light provided by the sun.

The solar PV panels then convert this sunlight to direct current (DC). Another component of the solar PV system called an inverter then turns this into alternating current (AC). This is the type of power that most Irish households run on. If it’s so sunny that your solar system produces far more electricity than you need, that AC power then goes back to the grid

The number of panels in a system and the power outage of each of these individual panels (kWp) corresponds directly to the amount of energy produced by the solar PV system. This means that in order to create a solar system that can power a house or building, you would require an array with many solar panels connected together. Typical system configurations can consist of between 6 – 18 panels depending on the consumer’s energy demand and roof size.

So Why Do Solar PV Panels Still Work on Cloudy Days?

Solar panels will not operate at maximum production when clouds are blocking the sun. However, anyone who has gotten sunburned on a cloudy day knows that solar radiation penetrates clouds. For that same reason, solar panels can still produce electricity on cloudy days.

The graph above shows the varying levels of irradiation throughout a calendar year. The total annual solar irradiation is stated as 952.6kWh/m2/year, however, it peaks in the summer months, before dropping off in the autumn and winter. Therefore, depending on the cloud cover and the quality of the solar panels, efficiency can drop at different points of the year, however this is not a major issue due to another component of the solar PV system – the storage battery.

Function of a Solar Storage Battery

A solar storage battery is a battery system that can be integrated with your solar panel system. As your panels convert sunlight to electricity, unused energy will charge the battery, which your home can then draw from when panel output is low.  Solar storage batteries are also particularly useful for anyone installing a system who also owns an electric vehicle. The batteries can make sure that there is energy available for household use, while the car is connected to a home electric charging unit.

Is the Irish Climate Suitable for Solar Energy?

This graph shows the power output of a Longi 365W panel at differing incident irradiance levels. The higher level or solar irradiance corresponds to a higher power output of the panel, i.e.; the more light there is, the more power a panel can harness. Again, it should be noted that even with low irradiance levels of 200W/m2, that the panel is still functioning. This proves that a solar panel will still work on a cloudy day.

Furthermore, even rain can actually help to keep your panels operating efficiently by washing away any dust or dirt. The battery storage component as discussed above helps to balance out lower production in the cloudy winter months. This makes solar energy an all-weather solution for your home.

Solar systems are engineered to prevent the effects of shading from causing all energy production to stop. If, say, 20 percent of the solar PV panels are shaded by a tree limb, only 20 percent of the system’s energy production is temporarily diminished – but no more. Here at SolarShare, we have specialised knowledge and know how to design your system so shading issues won’t be a problem.

Final Verdict – Do Solar Panels Work on a Cloudy Day?

To conclude, yes – solar panels can and do work on cloudy days. Therefore, they are a solid investment for any Irish consumer looking to save money on their electricity bills. It has been established that they won’t produce as much electricity in cloudy conditions but that shouldn’t put you off considering them, particularly if you live in the south east of Ireland.

Contact SolarShare for a free quote today and let us help you on your journey to zero-carbon living! 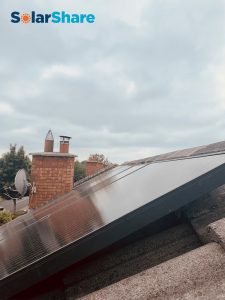 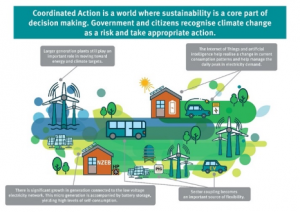 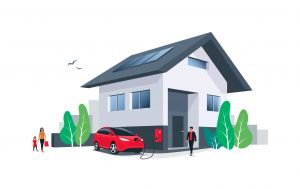 Can you get an electric car charger at home?